Masks on Planes for Vaxxed Americans, Review by Group of U.S. Senators 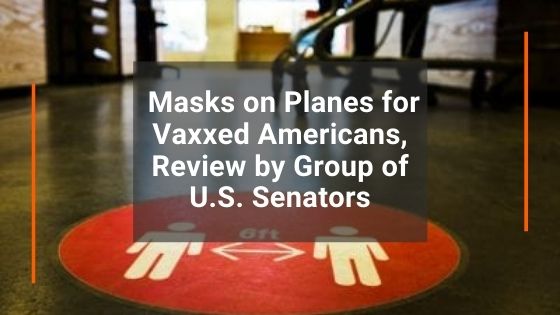 A group of Senate Republicans urged the Centers for Disease Control and Prevention (CDC) on Friday to stop requiring fully vaccinated Americans to wear masks on public transportation, including airplanes, trains and buses but also in airports and train stations.

Roger Wicker, the most senior Republican on the Senate Commerce Committee, and Ted Cruz, top Republican on an aviation subcommittee, along with Susan Collins, Jerry Moran, Cynthia Lummis, and Marsha Blackburn introduced a resolution urging the CDC to lift mask requirements in place since Feb. 1.

“Over 150 million people in the United States are fully vaccinated and mask mandates have been lifted across the country. But the CDC inexplicably still hasn’t lifted the mask mandate for public transportation,” Cruz said. “It’s long past time for President Biden and the CDC to follow the science.”

The lawmakers argued the change “would incentivize a greater number of individuals to receive the COVID–19 vaccine.”

In May, the CDC said fully vaccinated Americans could stop wearing masks in nearly all indoor spaces – with transportation one of the few exceptions.

Sara Nelson, international president of the Association of Flight Attendants-CWA, representing nearly 50,000 Flight Attendants at 17 airlines, said the union supported the mandate to help stop the spread of the virus and protect those who don’t have access to the vaccine, such as children under 12.

Since January, the Federal Aviation Administration has received 3,100 reports of unruly behavior on airlines, including 2,350 reports of passengers refusing to comply with federal face mask requirements.

On June 10, the CDC said it would no longer require travelers to wear masks in outdoor transit hubs and in outdoor spaces on ferries, buses, and trolleys but left indoor requirements unchanged.

WELCOMING BACK US AND EU

KLM will resume most rou

Masks on Planes for Vaxx

* These fields are required.