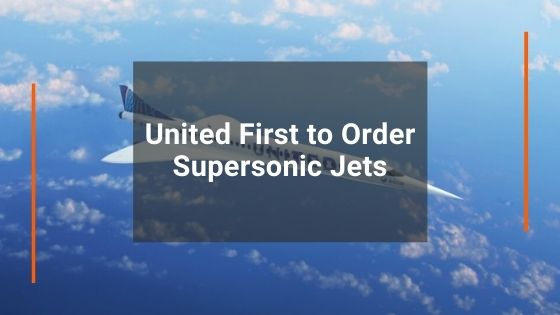 UNITED AIRLINES HAS ANNOUNCED IT WILL BE THE FIRST US AIRLINE TO OPERATE SUPERSONIC PASSENGER AIRCRAFT FROM BOOM SUPERSONIC. THE AIRLINE WILL TAKE 15 BOOM OVERTURE AIRCRAFT, WITH AN OPTION FOR 35 MORE, HOPEFULLY IN SERVICE BY 2029.

United Airlines today revelated that it will be the first US airline to go supersonic, placing an order with US-based Boom Supersonic for 15 aircraft. The two companies will work together on several operational and sustainability issues with the new aircraft. And if terms are met, United will purchase 15 aircraft, with an option to take 35 more.

The most likely routes, at least initially, would be transatlantic or transpacific. The same issues that Concorde faced with overland supersonic flights and sonic boom remain. The aircraft could fly from Newark to London Heathrow in three and a half and to Frankfurt in four hours. Transpacific, it could operate from San Francisco to Tokyo in just six hours.

“United continues on its trajectory to build a more innovative, sustainable airline, and today’s advancements in technology are making it more viable for that to include supersonic planes. Boom’s vision for the future of commercial aviation, combined with the industry’s most robust route network in the world, will give business and leisure travelers access to a stellar flight experience. Our mission has always been about connecting people and now working with Boom, we’ll be able to do that on an even greater scale.”

The Overture is the first aircraft planned to be net-zero carbon from launch, and this is part of the appeal to United. It uses a combination of materials, including carbon composites, titanium, and aluminum. And it can reach supersonic speeds without the use of afterburners (which Concorde, of course, used). It is also planned to operate fully with Sustainable Aviation Fuel (SAF).

United Airlines and Boom will work together on sustainability issues, including accelerating the production of SAF.

As part of the announcement, Boom has revealed more details about when the aircraft should be operational. It is hoped that the Overture will be rolled out in 2025 and take its first flight in 2026. It could then enter service by 2029.

A prototype aircraft has already been built, making Boom the furthest ahead of several companies working on supersonic aircraft. Its XB-1 prototype, a one-third-scale development just 68 feet long, was revealed in 2020.

United Airlines is the first US airline to order the Boom Overture jet. But other airlines have also expressed interest or made pre-orders. According to a 2017 report by FlightGlobal, there were then commitments from five airlines to buy 76 aircraft. This included Virgin Atlantic and Japan Airlines.